In October 2020, Shipt is expanding its “black box” algorithm pay structure to the entire country. After launching in the California and Washington markets with this pay nearly two years ago, Shipt quietly launched the new pay structure in a select few metros nationally in January of this year. This structure, dubbed “version 2” (v2), is a categorical pay cut, and Shipt is expanding this pay cut to all of Shipt’s workers.

Cutting pay for essential workers during a pandemic is reprehensible. These are the workers so many have relied on to shelter-in-place and stay safely at home throughout the pandemic, and they are now getting shafted by Shipt and its parent company Target. Meanwhile, they have profited exponentially off these workers’ backs.

Algorithmically generated pay is a very appealing concept for gig companies since pay can be tweaked and lowered at any time without announcement or warning to workers, and opaque “tweaks in the formula” can be called a “glitch” on their side when something goes wrong. This is why in the past few years, virtually every gig company has gone from an transparent commission-based pay structure to a proprietary algorithmically-generated one instead. These proprietary algorithms are intentionally surreptitious and allow companies to dial down pay. 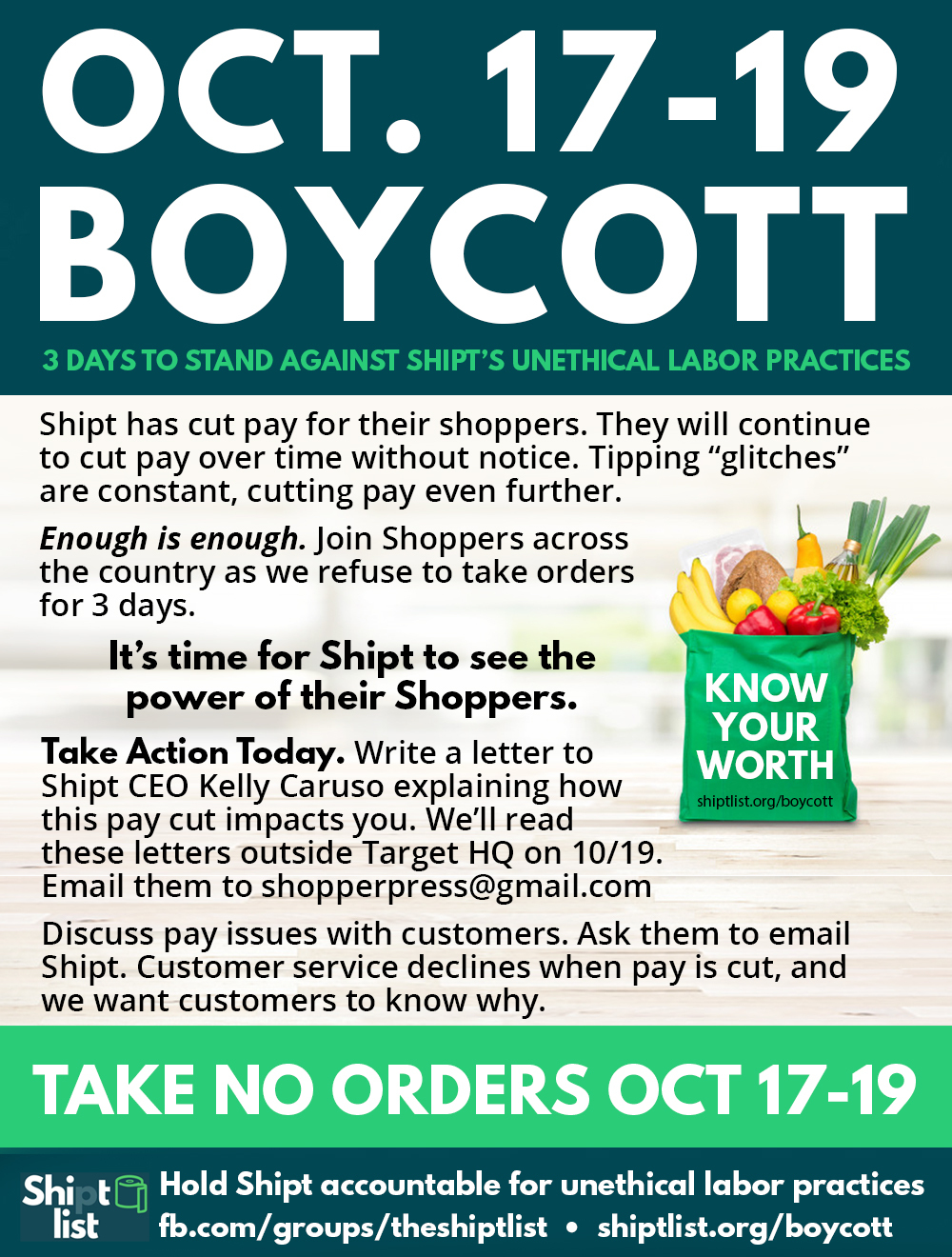 It is time for Shipt to see the power of its shoppers, and for us as shoppers to assert our worth. Write a letter to Shipt CEO Kelly Caruso explaining how this pay cut impacts you. We will read your letter aloud outside Target HQ on October 19. Email letters to ShopperPress@gmail.com.

Under a commission-based pay structure, workers can mathematically walk back the pay and verify that the payment is correct. Under algorithmically generated “black box” pay, workers have no way of independently verifying or even knowing if their earnings are correct. Workers are simply paid what Shipt says they’re getting paid. Shipt essentially has given itself a license to manipulate worker’s pay anytime they want. This behavior is not new; it’s been seen in other delivery services in recent years.

Previously satisfied workers who could work for Shipt as a significant portion of their income have been driven to the brink of insolvency with Shipt’s unilateral control over working conditions and pay. Workers deserve to be compensated fairly and consistently. Workers deserve to be able to speak up about their grievances, and workers deserve to be considered and heard. Shipt easily dismisses the concerns of any given worker, but we know Shipt can be held accountable and held to answer through collective worker action. 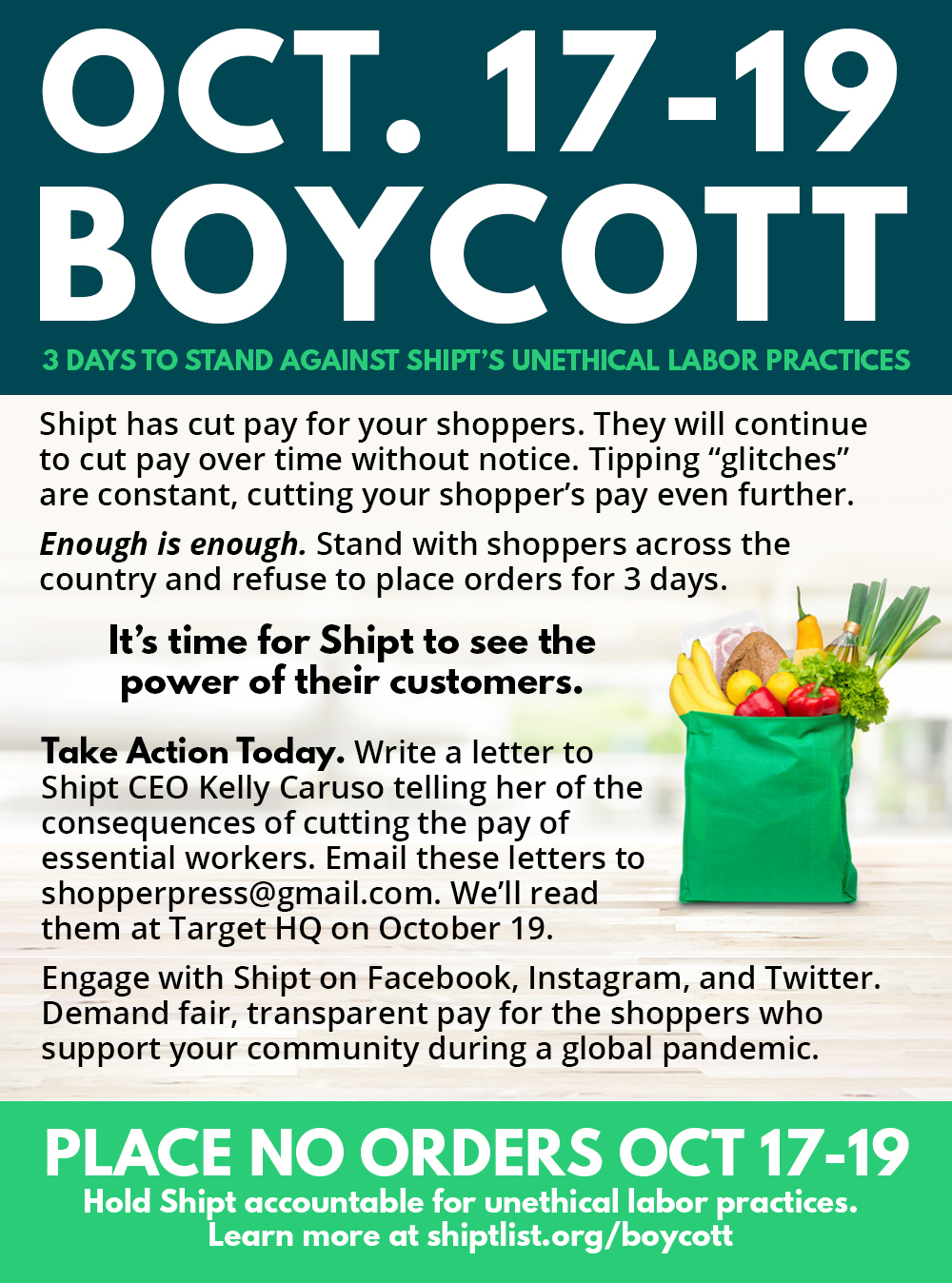 It is time for Shipt to see the power of its members. Shipt has cut pay for your shoppers that you have come to rely on during this pandemic, and they will continue to cut shopper pay over time without notice. Tipping "glitches" that treat the money you tip your shoppers as pure corporate profit are common. Email your complaints to ShopperPress@gmail.com, and we will read your letter aloud at our October 19 protest in front of Target HQ.

The Shipt List's Call to Action

In the first of its kind, Shipt workers are calling for multiday actions across the country to fight back, and there will be various ways workers can participate.

We also call upon Shipt workers across the country to walk out and boycott Shipt from Saturday October 17, 2020 to Monday October 19, 2020. Participation can include any of the following demonstrations and actions of solidarity.

Leading up to the walk-off we will also be taking the following coordinated actions:

1. Write a letter to Shipt’s CEO, Kelly Caruso, explaining how this pay cut impacts you. We will be reading these letters outside Target HQ on October 19th, 2020.

2. Discuss our pay issues with your customers, and ask them to email Shipt. Customers see a decline in customer service when our pay is cut, and we want them to understand why.

Please commit to spreading the word to at least five workers that you know or encounter while working, and to refer them to our website, www.shiptlist.org.